Sargent’s Daughters is pleased to present Mother Lode, the debut exhibition of Brooklyn-based painter Emily Furr. This will be Furr's first exhibition with the gallery, and will be on view from Friday, August 3rd through Sunday, September 9th, 2018.

The term “Mother Lode” can refer to both a principal vein of ore and a rich source, both of which conjure something valuable. Furr’s work references the feminine archetype, which she seeks to restore by working against the current phallocentric age and issuing in a new yonic era. If a phallic signifier points to action, explosion, and fortitude, a yonic signifier points to the subconscious, the sublime, and the cosmic void. A phallus points outward, a yonis inward. If the phallic is physical, the yonic is celestial. It is a portal into the dark unknown.

The paintings are small but impactful. Oil paint is slathered on with thick maneuvers, yet is controlled and detailed in its execution. Compositions are tight with objects bouncing off the edges as a way to create object to space tension. The small size of the work asks the viewer to move closer to create an intimate experience.

Furr grew up on the Midwestern prairie and that landscape influences her choices in painting.  The daytime colors of gold, cerulean, yellow and white oppose the nighttime colors of emerald, indigo and black. The enormous starry skies offered her a glimpse into the vastness of the universe. Through the small window of her paintings, Furr disassembles symbols from patriarchal systems to show the female aspect breaking through. 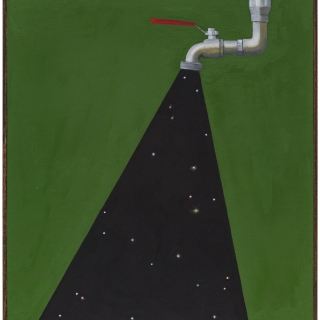