Sargent’s Daughters is pleased to present Accession, the debut New York gallery exhibition of artist Wendy Red Star.  Comprised of fifteen new print works, the show will be on view from April 28th through June 2nd, 2019.

Wendy Red Star works across disciplines to explore the intersections of Native American ideologies and colonialist structures, both historically and in contemporary society. Raised on the Apsáalooke (Crow) reservation in Montana, Red Star’s work is informed both by her cultural heritage and her engagement with many forms of creative expression, including photography, sculpture, video, fiber arts, and performance. An avid researcher of archives and historical narratives, Red Star seeks to incorporate and recast her research, offering new and unexpected perspectives in work that is at once inquisitive, witty and unsettling. Intergenerational collaborative work is integral to her practice, along with creating a forum for the expression of Native women’s voices in contemporary art.

In Accession Red Star presents a new series of prints based on her research.  Over a five-month period spanning 2016 and 2017, she worked as the Native Artist-in-Residence at the Denver Art Museum. While in residence, Red Star discovered a trove of hand painted card catalogues from the Works Progress Administration era that detailed the museum’s holdings of Native objects, including such items as clothing, moccasins, leggings, belts, and elk tooth dresses.  On one side of each 5x8-inch ochre yellow card was a beautiful watercolor illustration of the object; on the other, a description of the object, the date it was added to the collection, how much it cost, and other details.  The objects are beautifully rendered in watercolor by anonymous artists, who were often out of work commercial illustrators assigned to the Museums Extensions Projects during the 1930s-1970s.

Red Star felt an instant kinship to the works and wanted to use them in a project of her own in order to contextualize to the objects they depict and to honor them as works of art in their own right. “I felt a connection with the artists who created the work, and I was jealous of the time they got to spend with my ancestors’ materials,” she explains.

She decided to take digital copies of forty of these cards to her reservation in Montana during the Crow Nation’s annual Crow Fair, held every third week in August since 1904 along the Little Bighorn River. Nearly 50,000 people attend the fair, including around 11,000 enrolled tribal members, almost 80 percent of the Crow tribe. Every family constructs a camp, and members of the Apsáalooke gather every morning during the weeklong celebration for a parade symbolizing the moving of camp, an action that expresses the deep-rooted cultural tradition of movement in Apsáalooke society. Families put on traditional dress and display their horses during rituals that recall the nineteenth-century migrations from summer to winter camps. These parades pass on traditions from horse culture to car culture, from buffalo days to reservation life—weaving each generation into the fabric of a living, resilient tribal Nation.

Using the objects depicted on the catalog cards as points of reference, she took snapshots of similar Crow material worn during the parades. Waiting at the gathering place for the parade to begin, she identified individual parade goers and paired them with the most appropriate item cataloged on the cards, isolating intimate moments in the photographs and removing the backgrounds. In doing so, the subjects, the detail of their outfits, their facial expressions, and their finely-adorned horses came into sharper focus, highlighting the richness of Crow culture and giving context to the catalog cards themselves.

Items once draped on horses, cars, or the arms and bodies of Apsáalooke women, men, boys, and girls are linked to each of the illustrations on the catalog cards. “I am amazed by the similarities in the coupling of a photograph of a martingale on my daughter's parade horse with a WPA artist’s brilliantly-crafted drawing of a beaded geometric martingale from the 1930s,” says Red Star, “Sweat stains from the horses and grass stains from playful children offer insights into the utilitarian beauty of objects meant to be in motion. It demonstrates the strong cultural connection that the Crow community maintains through the generations.”

The isolation of the fair attendees from their original backgrounds leaves the viewer to focus on the exquisite details of Crow artistry: the fringe of one rider’s sleeve, bead work, blankets covered in geometric patterns, the intriguing way horses and cars are adorned similarly, women in elk tooth dresses, and men wearing feather back bustles and breast plates.   More than a historical study, Red Star’s project weaves a story of survival and ultimately a riotous celebration of a culture that has pushed back against marginalization. Red Star offers an alternative lens to view Crow Fair images, and a very real reminder that this cultural production is continuing to evolve. While so many dominant narratives are busily flattening Native identities and culture, Red Star is working to expand, personalize, and humanize through asserting her own particular perspective.

The resulting series is a vibrant meeting of past and present, honoring the artistry of the original makers who crafted the objects as well as the anonymous artists who catalogued them, and bringing back to life pieces that had remained sequestered under museum glass.  Red Star reanimates the objects by providing a content within their original intentions, confirming their place in living history and the powerful legacy of her own tribe within the larger context of contemporary American art. 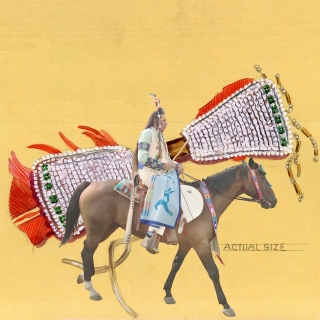